Urban paddling at its best

But I saw all these animals while still in view of skyscrapers and major highways, in the midst of Canada's third largest metropolitan area.

Anyone who reads my blog or Facebook posts on a regular basis knows I've been out of commission for more than a year, at least in terms of being able to travel much, and in particular, unable to travel in my favourite mode: paddling a canoe or kayak.

Since undergoing shoulder surgery in mid-June, it's been my goal to rehab and get back paddling ASAP.

It has been a tough row to hoe; at times, my pre-surgery shoulder made it difficult to even pick up one of my pet parrots, who weigh all of a pound.

But that is all starting to change, albeit gradually - and I've even been able to do salvage a bit of the summer and do some actual paddling.

I did push it a bit, but what really made it much easier to finally get back into paddling was a series of programs offered by Metro Vancouver Regional Parks throughout July and August.

The programs involved "urban" canoeing at a couple of different locations: Deas Slough at Deas Island Regional Park and on the lake in Burnaby Lake Regional Park.

Each program takes place three or four times, on Wednesdays and Fridays.

This 2-1/2 hour trip took us up what was essentially a backwater of the Fraser River on the south side of the island.

After not paddling for more than two years, I was a bit nervous, apprehensive about how my shoulder would hold up. I had discussed approaches with Nadine Plotnikoff, my physiotherapist from Form Physiotherapy, prior to my paddle, deciding I should only paddle on my left side, to ease the strain on my left shoulder.

Once I got into the canoe and onto the water, I realized doing the J-stroke (as opposed to a basic bow stroke) on the left was actually going to cause an impingement in that shoulder, so I switched sides - and it felt much better.

And it felt SO good to be paddling again! My soul soared!

And so did a bald eagle, along the shore, not 15 minutes into our outing. He seemed to follow us along the shore from tree to tree, as we paddled along the north side of the slough. We made several stops along the way to "raft up" and learn aspects of nature and history from our guide-interpreters, including facts about eagles, the ecology of the slough, and its history (including a story about a prohibition-era rum-running boat that legend has still sits at the bottom of the slough.)

For me, the real highlight was just getting out and paddling. But seeing an eagle close-up was also really cool - as was paddling underneath a bridge just south of the Massey Tunnel, a bridge that is part of Highway 99. (If you hike to the far west end of the island, you actually walk over the tunnel).

Two days later, we were back in the water, paddling in the Beaver Wetland Paddle in Burnaby Lake. I found it to be a more enjoyable paddle than the Deas Slough, partly because we could see more wildlife, and partly because my concerns about being able to paddle had been put to rest, at least for the time being.

So good to be back paddling, again!

It took us from the docks located near the park's Nature House, east along the narrow lake, past beaver lodges, lily pads and forested shores. We paddled as far east as we could, again, with several interpretive stops along the way, before turning back.

Not only were we treated to a gorgeous sunset, but we saw some herons, ducks - and a beaver! The world's second largest rodent (a South American capybara is the largest) put on quite a show for us, swimming back and forth in front of our still canoes before slapping his tail on the water and diving underneath.

This Twilight Canoeing event was a longer paddle, and much of it took place in the rain, five days after we'd been to the east side. We did see many herons, some more ducks - but no beavers, this time (although we did paddle around a large, free-standing beaver lodge and a resident eagle's nest).

We paddled as far as the bridge over Still Creek, before turning back.

Because of the rain and length of the paddle, my arms were glad when we finally got back to the dock.

For someone who had only been paddling twice after two years of no paddling, it was a bit of workout!

But like they say, a bad day paddling beats a good day doing anything else. And this was not a bad day - just a wet one.

These are wonderful programs, and a tip of the paddle goes out to Metro Vancouver Parks for offering them.

Posted by John Geary at 3:53 PM No comments:

Tips for travel writing - when you can't travel

It has been a while since I've sat down to post a new entry. In fact, it's been just over a year.

The reason? Very simple. I've been consumed with health issues the past year. 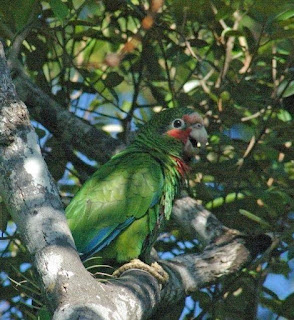 Just before my last post, August 15, 2012, doctors discovered my aortic valve was shrinking and causing all kinds of issues. I was born with a bicuspid valve disorder, so I knew this was coming for the past eight years.

After looking at the results of an echo cardiogram, I needed to have surgery, ASAP. It was scheduled for September, then postponed and performed in November.

Luckily, my angiogram showed my arteries to be completely clear, so I only had to deal with the genetic issue.

At that time, however, I was also dealing with a detached anterior shoulder labrum. Very painful, and it prevented me from paddling - which a lot of my stories focus on. It even made handling my parrots painful and difficult, at times.

I had surgery for that in mid-June.

Because of all these issues, I have been unable to travel much for the past year. It has also limited the amount of time I have been able to devote to writing.


That does not mean I have not been able to continue writing about travel, however, albeit in a limited fashion.

So how does a travel writer continue to write when he or she can't travel?

Well, there are many ways, including:

1. If you are mobile enough, but just cannot fly anywhere due to health reasons, you can always become a "tourist in your own town." Visit local sights, parks, museums, events, and write about them.

2. Find "business" type stories that focus on travel that you can blog about, or better still, pitch to a paying magazine or other publication.

3. Review travel books. There are tons of them out there, and plenty of places to review them. Literary travel books are probably your best bet. Since we're assuming you cannot travel, reviewing a guidebook of a foreign destination won't be very easy to do. However, you could review guidebooks specific to your area.

4. Re-work old stories. If you went to, say, Vietnam two years ago and published three stories based on your experiences, dig back through your notes or journal, and find additional new angles, new topics you have not written about, before. Then pitch them or blog about them.

These four ideas are just scratching the surface. There are probably many more, if you just sit down and spend a bit of time thinking.

Although travelling is one of the best aspects about being a travel writer, you don't have to stop in the event that your health or other issues conspire to keep you close to home. 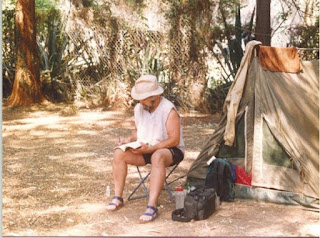