'Tis The Season To Be Cooking (and taking culinary journeys)...

After reading an article all about cookbook gift ideas well written by Mia Stansby in the Vancouver Sun (Wednesday, Dec. 21 edition), I thought, they're nice books, but I don't think any of them would be books I'd want in my collection.

I do have quite a collection - an entire bookshelf of cookbooks, in fact.

They're NOT your grandmother's cookbooks, though...(in fact, they're probably not even your mother's cookbooks - unless she happened to be a headhunter, Moroccan refugee or operator of a bordello).

I collect some of the most eclectic cookbooks you would ever want to read.

Okay, I know you're probably thinking, "What does this have to do with travel?" (Or for that matter, paddling or parrots?)

The fact is, culinary travel - adventures with food, journeys revolving around experiencing the food eaten by other cultures, cooking tours, or whatever term you want to use - is a huge segment of the travel market, these days.

At some point in the future, I'll probably write a blog post about the weirdest foods I've eaten while travelling. But for now, here are a few of my favorite cookbooks that also involve travel - if not real travel, then at least travel of your taste buds to new and distant foods.

To the best of my knowledge, all of these books are available online at Amazon.whatever - if not new, then certainly used.

DINING WITH HEADHUNTERS: Jungle Feasts and Other Culinary Adventures by  Richard Sterling 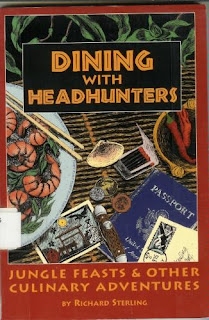 This is much more than just a cookbook; it's a collection of stories about the author's adventures around southeast Asia, many experienced while he served in the U.S. Navy during the conflict in Vietnam, during the late 1960's and early '70's. Some stories are just plain funny, some poignant, some bawdy (hey, he was a sailor, after all!) and some a combination of all of the above.
Each story is followed by at least one, usually more than one, recipe. The recipes are all based on food or drink he actually experienced in the story with which they're linked.
A few of my fav's: Satay Malaya from "The Feasts of Fatima," a story about falling halfway in love with a lady of the evening; Mojo (a drink) from "Mojo Rising," a story about a retired madam (hmmm...mmm..., am I detecting a pattern here...?); and Madalay Mail Chicken, from "Train Fare" (nope, no working girls in that one!)
THE CASABLANCA COOKBOOK: Wining and Dining at Rick's by Sarah Key, Jennifer Newman Brazil and Vicki Wells
Being a huge fan of this movie, and the owner of several other books about Bogey (and a few Moroccan cookbooks, as well), I had to add this one to my collection several years ago. In addition to some excellent recipes for drinks (champagne cocktail, Senor Ferrari's iced almond coffee) and food (coriander shrimp kebabs, ground lamb kebabs) this little volume contains photos from the movie, games and quotes from the movie. A "must-have" if you're a fan of the movie, a fan of Moroccan food, or just a collector of eclectic cookbooks like Yours Truly.

I really do love Moroccan food, so I guess one of these days, I may even have to travel there...

THE ENCYCLOPEDIA OF ASIAN COOKING Edited by Jeni Wright

This book has been in our household, well, ever since we've had a household. I used it regularly for preparing foods from India, Malaysia, the Philippines, Vietnam, Burma and Thailand, to name but a few. It's not really eclectic, I guess, but it certainly is useful. It even offers suggestions for recipe substitutions if you can't find an ingredient needed for a particular dish (which can sometimes be a bit of a problem if you live in a community without much selection or variety of Asian ingredients.) It also provides measurements in both metric and imperial formats.


Cooking Thai Cashew Chicken, a recipe from Extending the Table
THE LAST DINNER ON THE TITANIC: Menus and Recipes from the Great Liner by Rick Archbold and Dana McCauley

This is an amazing book, if you're into history, culinary or otherwise. It gives you a glimpse of what it was like to travel on what was, in its day, the largest ocean liner in the world. It details how the ship was organized in terms of class structure (based on whether you were sailing first-class, second-class or third-class. The passengers were restricted, by class, where they could dine, or even have a drink - quite a difference from today's cruise ship industry.

It includes some old photos as well as artists' renderings and conversion charts (after all, these recipes were from Edwardian England, so some recipes do need adjusting).

It's a wonderful book, taking you back to the last days of the "Golden Age of Travel."

EXTENDING THE TABLE: Recipes and stories from Argentina to Zimbabwe by Joetta Handrich Schlabach

This collection of world recipes is another cooking tome that's well-thumbed in our household. It features recipes galore as well as stories from around the world. One of the features I really enjoy is the way the book includes proverbs and quotes about food, sprinkling them throughout the book like a good cook sprinkles herbs and spices throughout a culinary creation to create a tasty meal. Example: Egyptian proverb: "An onion offered by a true friend is like a whole lamb."

A wonderful book for anyone wanting to explore the cuisine of other cultures within the confines of their own kitchen.

You had to know, given the title of this blog, that at least one book would involve a cooking-paddling combination, right?

This book - which is designed in a way that you could take it canoeing with you - talks about nutrition in the wilderness - an entire section is devoted to it. There's also a section on water and environmental issues.

Then there are the recipes ... breakfasts, bannock and bread, meals, soups, salads, desserts - this book covers them all, and more. Say good-bye to those freeze-dried packs you buy at outdoor stores and say hello to some real cooking ...
Posted by John Geary at 9:42 AM 2 comments: